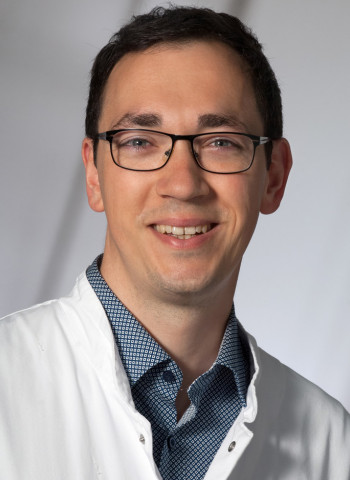 Use of dental MRI for radiation-free guided dental-implant planning: A prospective, in-vivo study of accuracy and reliability

Dental implants were introduced 50 years ago [1] and are now an established treatment option for the replacement of missing teeth [2]. Prosthetically driven backward planning, also known as guided implant surgery, is currently of fundamental importance in implant surgery [3]. As the use of dental implants grows [4], the number of CBCT will also increase [5]. Compared with two-dimensional radiography like panoramic radiographs, however, the radiation dose of CBCT is nonetheless 2–200 times higher (range 10 – 1000 µSv) [6, 7]. A meta-analysis identified the potential lifetime risks for thyroid cancer and meningioma posed by repeated X-ray-based imaging (two- and three-dimensional images) in dentistry [8]. In this context, dental MRI as a non-ionizing, cross-sectional imaging modality could be of benefit, especially in younger patients. The feasibility of dental MRI for backward planning has been show very recently in a case series [9]. The reliability and accuracy of dental MRI, however, has not yet been evaluated in a clinical setting. We wanted to test, therefore, whether implant-planning decisions based on dental MRI would differ from those based on the reference imaging technique of CBCT and whether surgical guides derived from dental MRI would be sufficiently accurate to perform implant placement. The objectives of this study were therefore: (I) to qualitatively evaluate the reliability and accuracy of dental-MRI-based decisions regarding implant planning and (II) to quantitatively evaluate the accuracy of dental-MRI-based surgical guides.

Altogether 34 participants were consecutively enrolled (Figure 1). The inclusion criteria were as follows: in need of a dental implant (including implant placement with simultaneous bone augmentation), teeth in both quadrants of the jaw (minimal number of three) to allow for reliable guide positioning; delayed implantation (at least three months after tooth extraction); and a stable medical condition to undergo implant surgery. The following criteria were grounds for exclusion: a two-stage surgical procedure with separate bone augmentation and implant insertion; contraindications to 3T MRI; age below 18 years; pregnancy; and claustrophobia.

Full-arch impressions to obtain a stone cast and a 0.4 mm isotropic, artifact-suppressed, proton-weighted dental MRI scan of the relevant jaw were taken for each participant (Figure 2). DICOM data from the dental MRI and STL data from the digitalized stone cast (D2000, 3shape) were subsequently imported and co-registered in an established software program for guided implant surgery (coDiagnostiX 9.12, Dental Wings Inc.). To assess the intra-modality reliability backward planning was performed independently by two experienced dentists with more than seven and 20 years’ experience of implant planning, respectively (Video 1). The dentists were asked to determine a treatment plan (implant type and dimensions, need for and type of bone augmentation, and implant position and axis) in accordance to manufacturer specification of the implants and established clinical criteria [10, 11]. If bone augmentation was required, the type of augmentation had to be specified (spread, split, bone chips, block, sinus lift, condensing, or any combination of the aforementioned procedures). Next, a tooth-supported guide was 3D printed for each participant.

To transfer the MRI-based implant positions and axes into the CBCT datasets, surgical guides with a metal marker were placed intraorally during the CBCT scans (Figure 2). The qualitative accuracy was assessed by re-evaluation of MRI-derived implant position and the MRI-derived treatment plan in CBCT by both dentists together, according to the same criteria they were using for the MRI-based planning.

To determine inter-rater and inter-modality reliability, Cohen’s kappa (κ) and the 95% confidence interval (CI) were used and interpreted as described previously [13]. Differences in accuracy between implant sites used to restore shortened dental arches and those in tooth gaps were analyzed using Mann-Whitney U or two-tailed Student t test, depending on data distribution in Shapiro-Wilk test. A level of significance was defined at p ≤ 0.05.

In total, 34 participants were consecutively enrolled in this study. Four participants could not be included in the final analysis (Figure 1). Thus, 45 implant sites among 30 participants were planned and evaluated in total (17 women, 13 men, mean age 56.9 ± 13.1 years). Implants were placed between neighboring teeth in 26 sites and used to restore shortened dental arches in 19 sites.

The high spatial resolution protocol produced detailed images of the jaws that could be assessed in all three dimensions without a reduction in image quality (Figure 3). Consequently, mean inter-rater agreement (mean κ 0.814; 95% CI 0.741–0.887; Figure 4A) and mean inter-modality agreement between dental-MRI-based and CBCT-based decisions (mean κ 0.879; 95% CI 0.811–0.948) were both excellent. After re-evaluation of the dental-MRI-based plans by means of comparison with CBCT, no changes were made with regard to implant type, neck type, implant length, or implant diameter for 43 out of 45 planned implant sites (inter-modality κ range 0.788–1; Figure 4A). For one site, the implant diameter and for another site the implant length were Bone-augmentation procedures were performed for more than 50% of implant sites (23 out of 45; Table 1). For 42 of the 45 implant sites, the decision whether to perform bone augmentation or not was made correctly on the basis of dental-MRI planning (κ 0.867; 95% CI 0.722–1). For three sites, the need for bone augmentation was not predicted by dental MRI, but was subsequently identified based on CBCT images (negative predictive value (NPV) 0.88; see example in Figure 5A). For one implant site, extensive bone loss was predicted by dental MRI correctly. Consequently, the implant site was classified as unsuitable for simultaneous bone augmentation and implant placement (Figure 5B). Dental-MRI-based planning did not incorrectly predict the need for bone augmentation for any site (based on re-evaluation after CBCT; positive predictive value (PPV) 1). For all implant sites where the need for bone augmentation was identified on the basis of dental MRI (n = 20), the decision was confirmed by CBCT (20 out of 20 sites; κ for all 23 augmented sites = 0.782; 95% CI 0.588–0.976).

For 31 out of 44 sites (70.5%), the planned implant position was not altered after the CBCT-based re-evaluation. Small changes were made to the implant position of 13 sites (29.5%; mean change of 1.8 mm) and to the implant axis of three sites (6.8%; mean change of 10°). The subgroup analysis of implants placed in tooth gaps versus implants placed to restore shortened dental arches revealed significant differences (Table 1). Significantly less corrections were performed by both dentists for the implants placed in tooth gaps compared to implants placed in free-ending positions for both, the CBCT-based corrections of the entry point (0.2 ± 0.5 vs. 1 ± 1.9 mm; p = 0.01) and angulation (0 ± 0 ° vs. 1.7 ± 3.8; p = 0.04). As all changes, except one, affected the second (unguided) drill, and not the first (guided) drill, 97.8 % of guides (43 out of 44) were classified as suitable for implant surgery after qualitative evaluation of dental MRI.

This study shows that dental-MRI-based backward planning is highly reliable and results in sufficiently accurate surgical guides. It also showed, however, that the method is not yet capable to achieve the highest prosthetic and surgical demands on treatment planning in all cases.

This study has several methodological strengths. First, it made use of a previously established technique to visualize tooth surfaces within dental MRI [14]. As a result, it was possible to integrate dental MRI into an existing digital workflow without the need for additional software or time-consuming postprocessing steps. Second, it used a single-scan protocol with an examination time of less than 10 minutes. This has the potential to reduce examination costs. Finally, the accuracy of the dental-MRI-based treatment plans was directly compared with the clinical reference imaging modality of CBCT.

Although dental-MRI-derived implant planning resulted in accurate decisions regarding implant type, dimensions, and type of bone augmentation for most implant sites, it must be noted that the planned implant position and angle were changed slightly (for 29.5% and 6.8% of implant sites, respectively) at the stage of unguiding drilling after CBCT re-evaluation. In addition, three participants in need of bone augmentation were not identified as such from dental MRI images (NPV 0.88; PPV 1). Without the CBCT for re-evaluation, this would have resulted in a moderate extension of operation time in two cases and in a failed implantation in one case. This might be because partially calcified tissues appear different in CBCT images than they do in MRI images, especially if cortical bone borders are still intact as in our case. Consequently, the volume of bone available can be overestimated from dental MRI images. Implant planning based on dental MRI might therefore require the involvement of dentists and oral surgeons with sufficient experience of interpreting dental MRI images or a learning curve has to be acknowledged, respectively.

The subgroup analysis revealed more and significantly larger corrections of MRI-derived implant position / angulation in free-ending positions compared to implant sites between neighboring teeth and slightly less accurate MRI-derived surgical guides (not statistically significant). As the spatial distribution of available teeth surfaces for co-registration is limited in patients with shortened arches the co-registration of MRI and digitalized impression data might be less accurate in these patients, leading to a less precise transfer of the virtual implant position into the surgical guide. That result is in accordance to previous studies which reported a similar dependency of the accuracy and the number of residual teeth [15, 16].

The authors are not aware of any similar studies that have evaluated the accuracy of CBCT-based templates in vivo, most likely because of ethical concerns associated with a second preoperative CBCT scan. However, one ex-vivo study by Kühl et al. on CBCT-derived template accuracy is available for comparison [17]. Their study investigated the accuracy of surgical guides printed from cast models using the same planning and evaluation software ex vivo. For a 10 mm implant (the most frequently used implant length in our study), Kühl et al. reported an apical deviation of 0.49 mm (minimum 0.13, maximum 1.09 mm). By comparison, apical deviation in our study was larger (mean 1.3 ± 0.7; minimum 0.2; maximum 3.1 mm). This may be due to our in vivo setting (i.e. incorporating motion artifacts) and a lower scanning resolution (0.4 mm isotropic; accuracy of optical scanner used by Kühl et al.: approximately 15 µm). Another source of errors in our study was registration accuracy, which had an effect twice: once in the implant-planning procedure (registration of dental-MRI data with digitalized tooth models) and once in the quantitative assessment of surgical-guide accuracy (registration of dental MRI with CBCT). For registration in implant planning, tooth surfaces are commonly used. The errors for in vivo tooth-surface reconstructions derived from dental MRI and CBCT (mean error ± root mean square of dental MRI and CBCT: 0.26 ± 0.1 and 0.1 ± 0.04 mm, respectively) were reported in a recent study [14]. This explains, at least in part, why accuracy was lower in our study than in Kühl et al.’s.

Several limitations of this particular application of dental MRI must be addressed. The value of our reliability assessment is limited to some extent, as both surgeons were working in the same department. Moreover, the costs of dental MRI currently restrict its clinical use.

In conclusion, our feasibility study contributes to the current literature by providing evidence that dental MRI-based backward planning is reliable and results in surgical guides sufficiently accurate for implant placement. More research, however, is necessary to increase the accuracy of dental MRI, for example by increasing spatial resolution or decreasing acquisition time to reduce motion artifacts. These findings may help to facilitate prosthetically driven backward implant planning without radiation exposure. This is particularly important in relation to younger individuals, who are more sensitive to radiation. However, more studies regarding dental MRI and implant placement are required before this imaging modality can be used outside clinical studies. 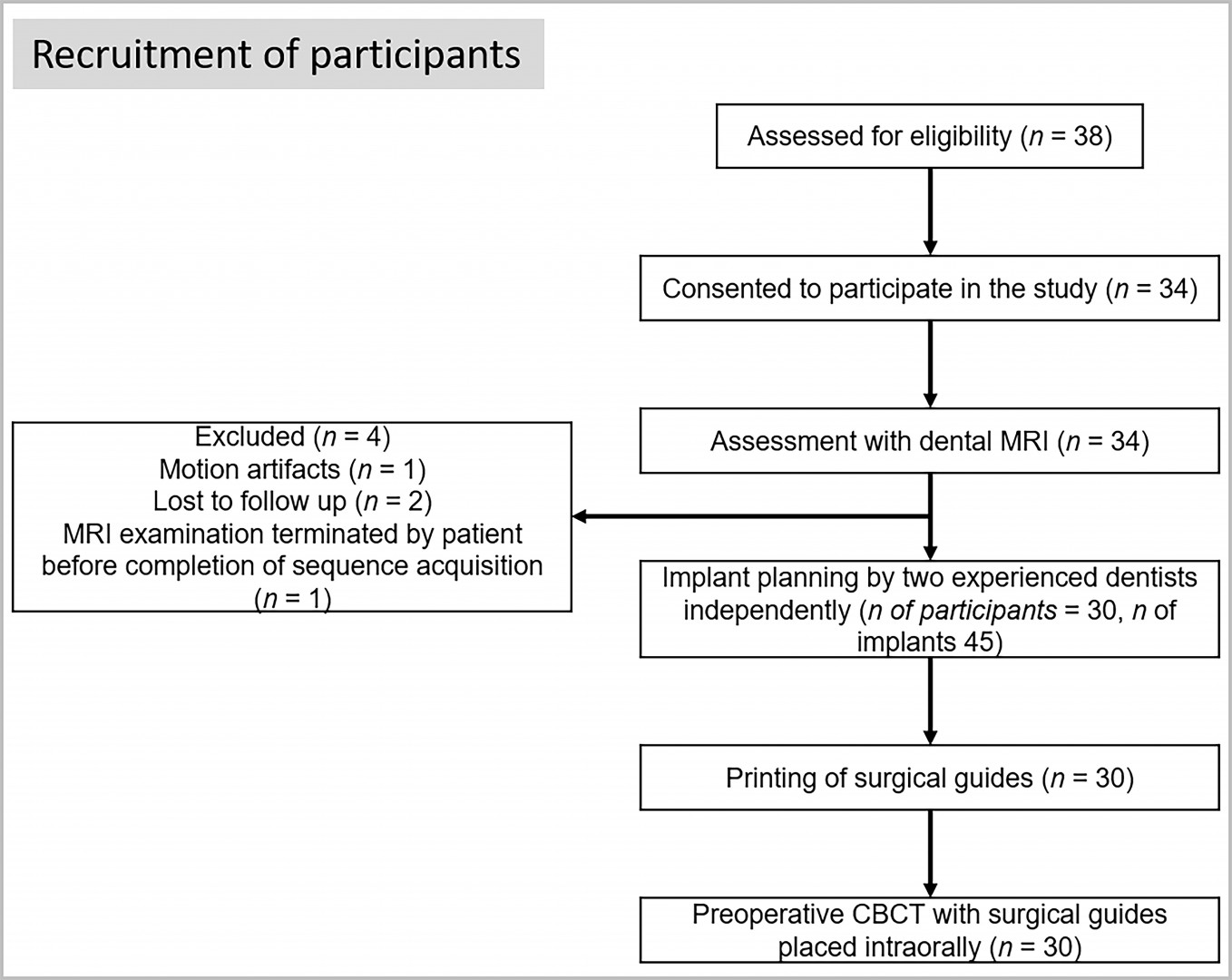 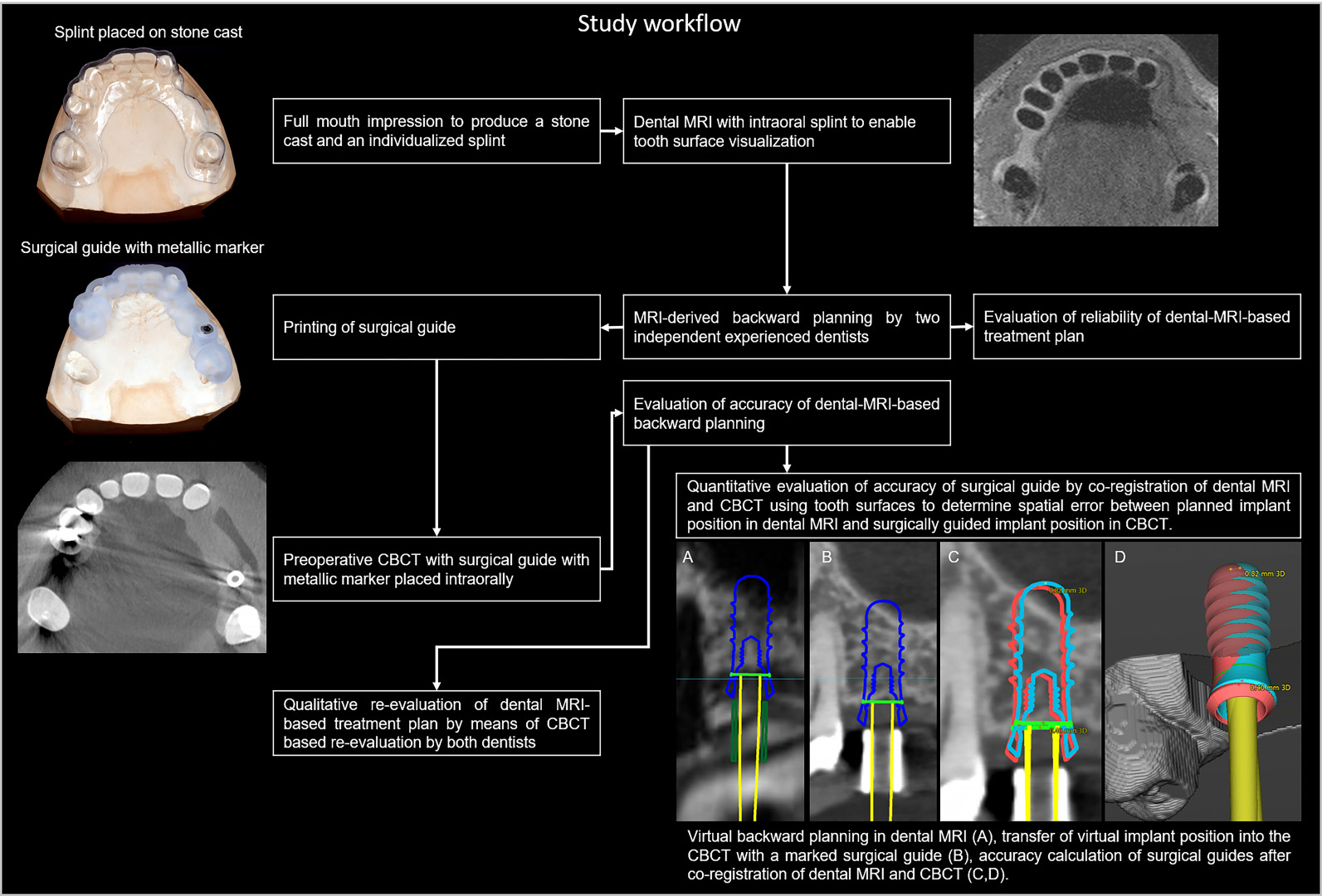 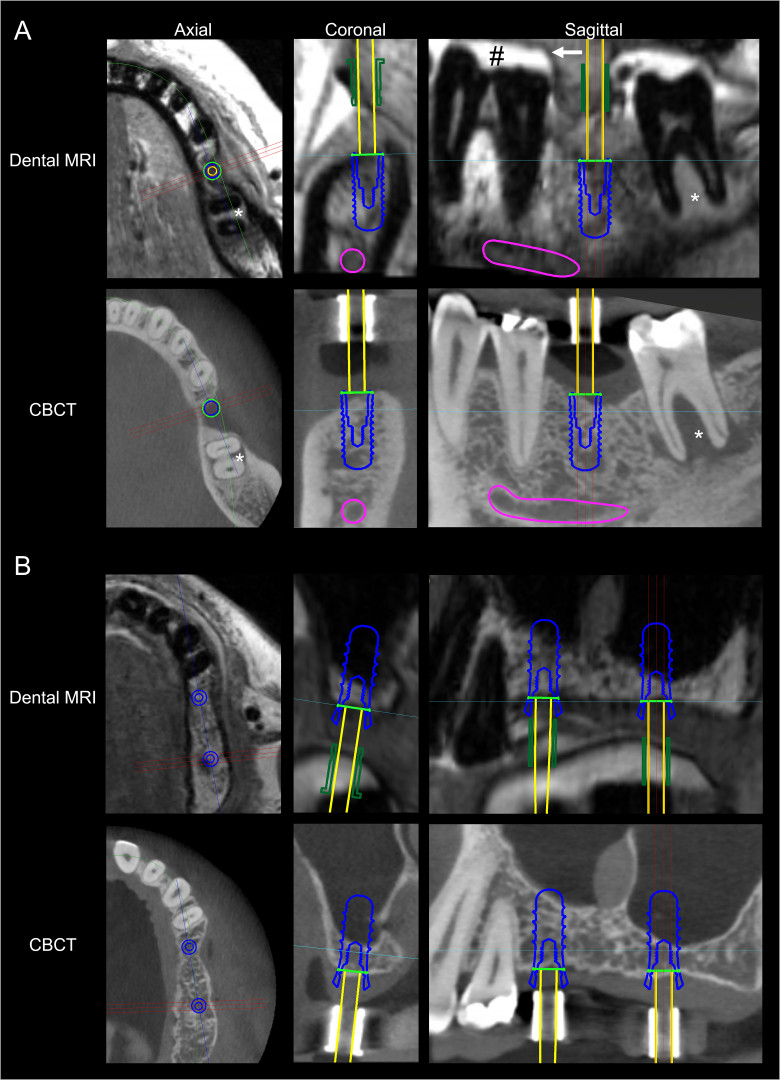 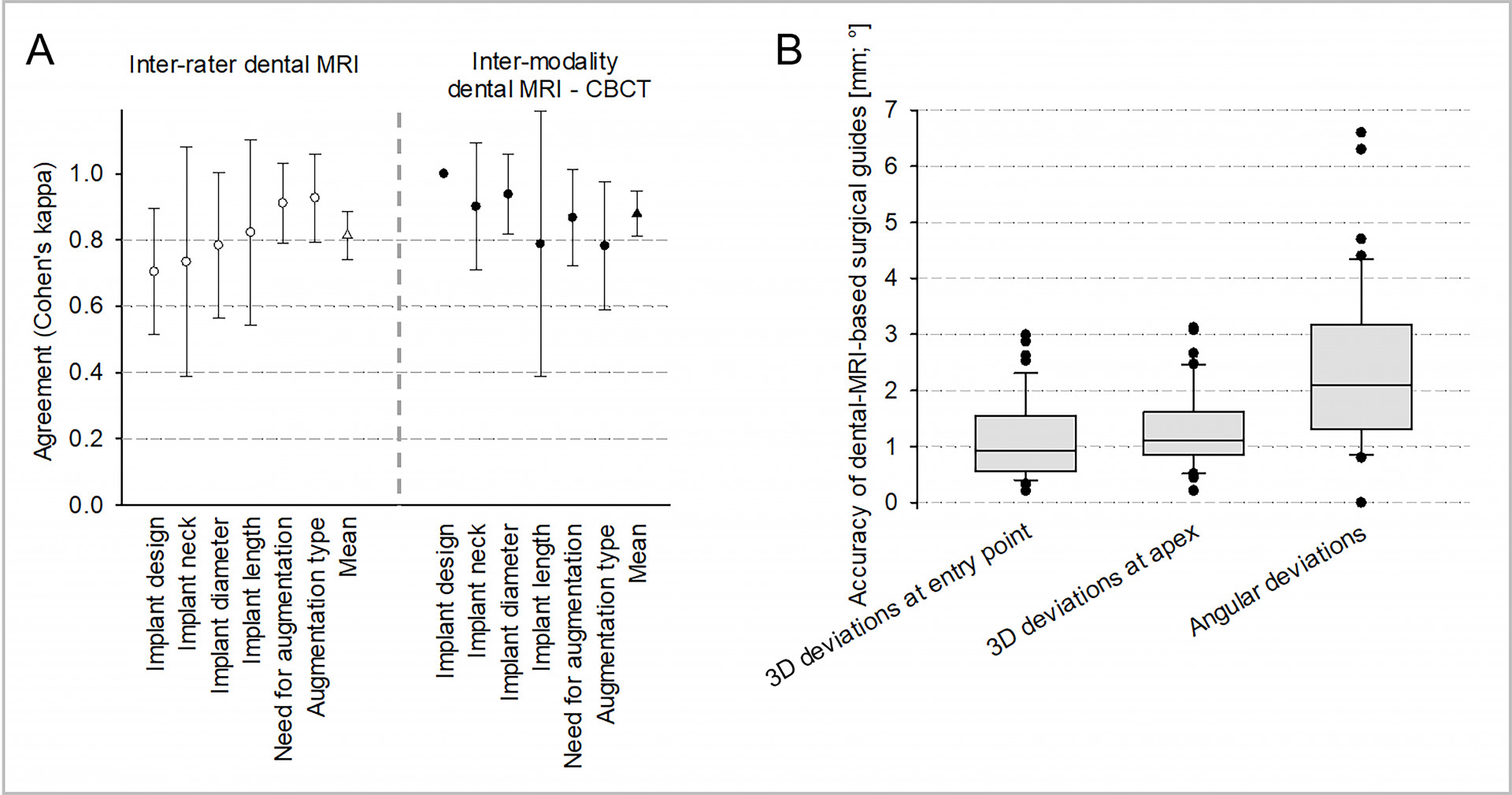 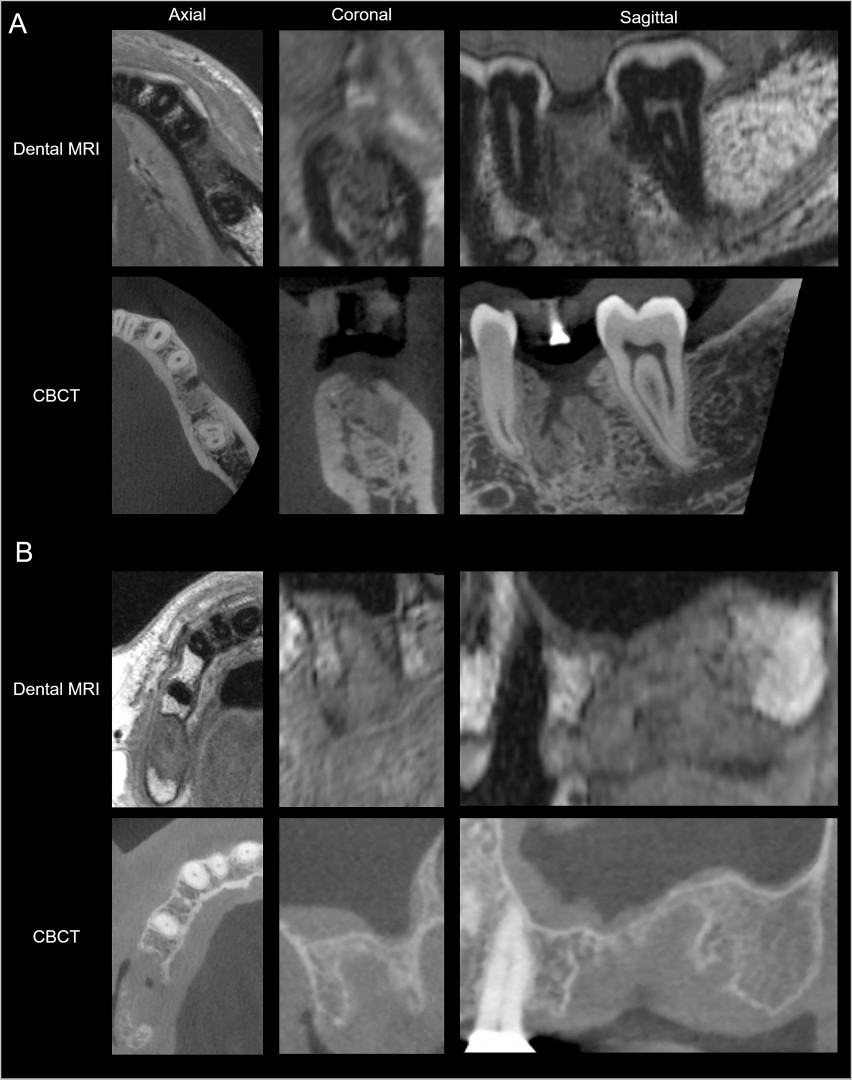